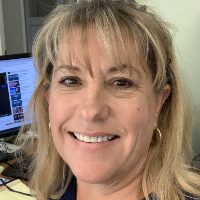 Melanie grew up in Klamath Falls from 1972-1998. She attended Klamath Union and graduated from OIT with a Bachelors of Science and an Army ROTC Commission in 1998. She served 4 years in the U.S. Army and is a veteran of Desert Storm.

After her discharge in 1993, she married my husband Tracy who also served in the U.S. Army and is a veteran of Desert Storm, Bosnia, and Iraq. He retired after 22 years in 2006 and currently works at KCC as Department Head of Veterans Education. They have two children, Josh and Rachael. Josh will be attending Oregon State University through the ROTC program. Rachael will attend KCC for an Associate’s in Digital Design and then transfer to George Fox for continuing education.

Melanie became a believer in 1994. She has been part of many church bodies due to the nature of moving around in the military and have enjoyed them all. She believes that we are all one under Christ Jesus and considers all brothers and sisters in the Lord. She looks forward to serving you!